A little about Todos Santos Pueblo Mágico located 10 miles to the north of Cerritos. 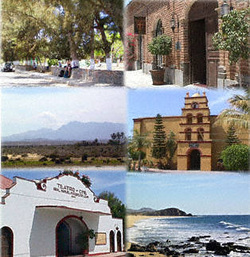 The village prospered during the last half of the 19th century & first half of the 20th century on sugar production & in 1850 there were eight sugar mills in the area. Sugar production lasted nearly 100 years & most of the beautiful colonial style buildings and handsomely-built homes were financed by sugar monies. Many of these buildings fell into ruins in the 1950's when there were droughts, the water table dropped drastically & began to dry up, causing a great loss of cane crops. This along with the low prices of sugar after WWII caused a great financial decline for the area & forced many of the families living here to move elsewhere. Now the rich farmlands have been re-worked & the town prospers from an abundance of Poblano chili farming, Avocado, Papaya & Mango orchards (and Organic Vegetables) Fishing & Ranching.

Since the early 1980's there has been an influx of tourist activity due to the paving of Mexico Highway 19 from La Paz through to Cabo San Lucas. In recent years many Fine Artists, artisans & crafts people have moved into the area. Todos Santos is becoming well-known as a Cultural & Artistic center. There is great optimism that eco-tourism will be our future...